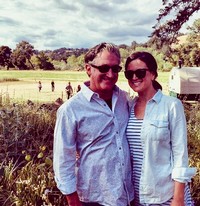 Mick Unti co-founded Unti Vineyards Winery with his dad George Unti, in 1997, where he manages operations of the winery including winemaking, sales, and marketing.  MIck has worked in almost facets of the wine business, including retail, wholesale and winery production since the mid 1980's.

Mick and his dad are avid consumers of Italian, French, Spanish and German wine, which explains for why they aren’t afraid to make wines from grapes not commonly grown in California.

Danae grew up in Sonoma proper and worked in publishing before entering the wine business in 2005. After a chapter in San Diego and an MBA in Bordeaux, France, Danae settled back in Sonoma County and executes on all things UNTI communications + marketing related. Danae is a dedicated dressage rider, animal rescuer, + a building + design addict.

George and his wife, Linda, farm 60 acres of grapes, and are co-owners of Unti Vineyards Winery. George was born in Fort Bragg, CA and spent his early years divided between Fort Bragg and Madera, CA where his parents were farmers. He graduated from Fort Bragg High School and San Jose State University. While in Fort Bragg he got his first job with Safeway, with whom he spent a fulfilling 39 year career, culminating with his last 9 years as regional manager for Northern CA, Nevada, and Hawaii. George and Linda yearned to return to life on a farm and did so in 1990, and succumbed to the lure of a winery in 1997. Now they work 24/7, but for themselves.

A former resident of L.A. Dodger territory, Jason’s interest in wine ultimately pulled he and his family to the Bay Area to return to the restaurant business and pursue a degree in Viticulture and Enology from U.C. Davis. Upon graduation in 2005, with a wife and two children in tow, Jason took a cellar job with the venerable Paul Hobbs Winery, which evolved into a full-time Enologist position through the 2007 harvest. After a brief sabbatical at Kosta Browne Wines, Jason returned to Paul Hobbs in 2008 to become the winemaker for CrossBarn Winery; transforming CrossBarn from a secondary label into a revered brand with dedicated vineyards, state of the art facility and staff. After the 2011 harvest, Jason was approached to become the founding winemaker of a new estate project on Howell Mountain, revamping the historic White Cottage Ranch property into a top-tier Napa Valley estate. Early 2015, with the meticulous technical experience under his belt, Jason’s winemaking propensity breached into European varietals, and he joined Unti Vineyards. He looks forward to continuing top-tier winemaking and continuing Unti’s quest to produce Rhône and Italian varietals from the DCV estate… And, of course, drinking plenty of wines along the way to help prove their point. 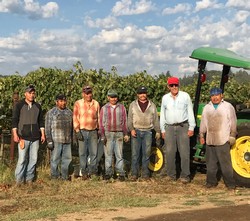 Unti Vineyards is composed of a six-man, hands-on team working year-round for the winery. They are involved in every part of the vineyard operations — from pruning to hand harvesting, and know each and every vine intimately. Adrian, Romulo, and Ruben have worked with George Unti at the winery, since the mid-1990's. We are proud and feel fortunate that other employees have been with us for significant spans of the winery's life — some from 10-17 years. They are knowledgable, skilled, dedicated, and take full-ownership of every part of the vineyards.